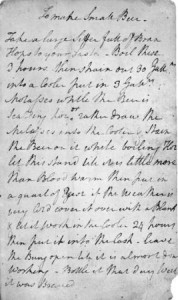 While serving in the Virginia militia prior to his presidency, Washington recorded his now-infamous small beer recipe in his diary which is now in possession of the New York Public Library.

The bulk of the fermentables are derived from molasses, as malted grains are not included in the recipe because they weren’t readily available. Molasses, a byproduct of the sugar refining process, was a very popular brewing ingredient as it was easy to procure, fairly affordable and, most importantly, fermentable.

Before sharing the recipe, it is important to point out that those who have made it don’t speak highly of its flavor. After all, the purpose of this small beer was not enjoyment but rehydration. If you are looking for a tastier colonial ale that utilizes molasses, try Poor Richard’s ale.

George Washington’s small beer recipe, as written in his diary:

Take a large Siffer [Sifter] full of Bran Hops to your Taste.–Boil these 3 hours then strain out 30 Gall[ons] into a cooler put in 3 Gall[ons] Molasses while the Beer is Scalding hot or rather draw the Melasses into the cooler & St[r]ain the Beer on it while boiling Hot. Let this stand till it is little more than Blood warm then put in a quart of Yea[s]t if the Weather is very Cold cover it with a Blank[et] & let it Work in the Cooler 24 hours then put it into the Cask–leave the bung open till it is almost don[e] Working–Bottle it that day Week it was Brewed.